And Wicca Week Award goes to: 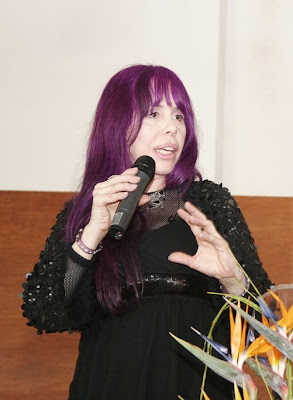 Baby Do Brasil
In the seventies she used to be a hippie, singing in the Novos Baianos band. She was then called Baby Consuelo. In the eighties, she was the ultimate new wave brazilian hooker and she adopted the Rá religion, as seen on this video from the song Barrados na Disneilandia (banned from disneyland)as seen performed on the first Rock In Rio:

She had daughters with unbelievable names as Nana Shara, Riroca (that later changed her name to Sarah Sheeva) and Zabelê. On the nineties her daughters formed a band called SNZ. (She also had three sons named Pedro Rá Baby, Krishna Baby and Kriptus Rá!!!!!!!!!!)

In the nineties she changed her name to Baby Do Brasil (Baby from Brasil). Check this video of her singing Amazing Grace.

Lately she formed her own church which has 27 followers and she is the main preacher, like Tom Cruise from Scientology.
Baby, you're Wicca.
Posted by CSS at 6:16 PM