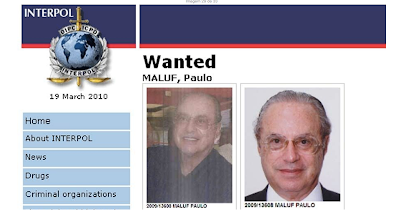 This guy was mayor of Sao Paulo for like 12 years. And during the dictatorship he was governor of the state of Sao Paulo. At that time built a viaduct that made it easier to him to get to his factory, what an entrepreneur. That viaduct happened to split downtown Sao Paulo, one side is rich, the other is poor. Along the viaduct, great apartment buildings turned into hell livings. The viaduct passes like 3 feet from the windows. It's that beautiful viaduct where we shot the video for Let's Make Love And Listen To Death From Above.

Oh. He is ALSO notorious for a smart quote on rape.
"If the guy has sexual needs, rape. But do not kill".
BURN IN HELL PAULO MALUF.
Now he is wanted by the Interpol for fraud and scams. His lawyers said that him featuring on the Interpol website was a huge offense to the Brazilian Congress! Oh, how offended we are. Fuck off. Get sick and die soon.
Posted by Adriano Cintra at 12:19 PM